Purple Rain was his 6th studio album and the release that took him from star to SUPERSTAR. For early Prince fans he was always a superstar, but Purple Rain was next level and put him in a brand-new spotlight, world-wide.

He was a prolific songwriter, a soulful singer, a funky and masterful guitarist, a brilliant producer and he was a MUSICAL GENIUS. Other artists, no matter their genre were often inspired by, and gave props to Prince.

When it came to Prince there were no color lines, he was gender bending, and he was androgynous.

He often said that he was just being his true Gemini self.

Prince is one of my favorite artists of all time. I am one of the obsessed fans that would go to a Prince concert (that could last over 200 minutes) and then head to a smaller venue or club for the after-concert “secret” Prince show. I remember singing, dancing and sweating till dawn with hard core Prince fans at those legendary secret shows.

One of my favorite secret shows was a mansion party in the Hollywood hills. Entry to the party was by invitation only. It was one of his famous “3121” parties. Each party was slightly different from the previous ones. You never knew what Prince would play at his after-show parties. My favorite was when Prince decided to perform classic funk and party songs. It was a star-studded guest list. This particular party will remain in my mind forever.

I also had the pleasure of being invited to his Paisley Park compound and studios for a pre-release listening party to hear his Emancipation album. After Prince played and discussed each song on the three-hour “triple” album, he asked the 13 invited guests if we would like a demonstration. We were not exactly sure what he meant but we WANTED anything he was giving.

Well, he left us in his massive sound stage room that was obviously used to rehearse his many tours. Shortly all the lights were turned off and we stood in total darkness. Suddenly, a purple spotlight hit the stage and Prince emerged to play a set of some of his hits. I stood right in front of the stage and him along with 12 other invited guests as he played Purple Rain. This was a magical memory that I will cherish forever.

My most treasured item and moment with Prince was in 2001 when he released his 24th album on NPG Records along with Redline Entertainment. The album was “The Rainbow Children” and I was a buyer for Wherehouse Music. I was told that my sales rep was bringing something special to me from Prince. I had been given a few things from Prince over the years but this time my sales rep walked in with a CD. He asked me to play track 12, called “Family Name”. I listened closely for several minutes but nothing was standing out until I reached about 6:09 of the 8:17 minute song. It was at that moment in the song where Prince was jammin’ on his guitar and he said, “make a sound” then all music ceased and he very clearly said, “Violet Brown”. Then he went back to jammin’. I could not believe my ears and it made me very emotional.

It was a while later at a Goapele show in Hollywood where I saw Prince face to face, and I was able to tell him how much the mention of my name in his song meant to me. He was with Rafael Saadiq, who I knew well, and when I told Prince how his gesture touched my heart, I got emotional. Rafael found this to be funny which helped me to calm down a bit. These are my most memorable times with Prince.

Now, if you would like to add any of the 39 Prince studio albums or the 5 live albums or perhaps some of his 17 video releases, check out the selection of Prince music and movies available from my blog sponsor DeepDiscount.com here. The Purple Rain CD is available here. And one of my other sponsors, popmarket.com has the classic picture disc LP here. 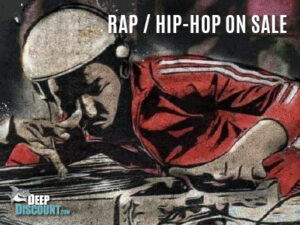