Through the years I have attended several farewell tours for artists that were retiring and ending their live shows. Back in the day before the luxury of buying tickets from our phones or computers, we went to the box office of venues or record and department stores to buy our tickets.

We would line up and sometimes camp in parking lots until the box office opened.

When “FAREWELL TOURS” were announced, I would definitely get a ticket to the “last” show in my area. I would guard that ticket like gold until the night that I would see my “fave” artist perform live for the last time.

Then miraculously 1, 2 or 3 years later the artist that retired would return for another show. This happened a few times before I no longer believed in these farewell tours. Some of the artists and bands were in their 30’s when they announced their retirement. These announcements seemed to happen a lot in the Rock and Hip-Hop genres.

Can you imagine being able to retire in your 30’s?

Well neither could some of the retirees so they would come back for more FAME…..and fortune. I tend to believe it is the fame they missed most.

Some retirees were bold enough to say that they retired just for album and ticket sales. I suppose that is their way of dipping into their “retirement funds.” Some artists even said that their record label or manager told them to pull off this “Farewell Tour” hoax. A good portion of us will always fall into the “FAREWELL” trap, because we never know when the “story” might be true.

HERE ARE JUST A FEW OF THE ARTISTS THAT RETIRED ONCE OR EVEN TWICE…..and counting

Motley Crue announced their retirement in 2014…

…but if you feel like rockin’ out you can purchase tickets now to see them this summer. You can also OWN their last “final” show that was recorded on December 31, 2015, in their hometown of Los Angeles, CA. This is a GREAT live recording!

Cher….If she really could really “Turn Back Time” she might be retired and enjoying a boyfriend (half her age) on an island in paradise.

She earned 250 Million dollars which would be plenty for us “regular” folks to retire on, but Cher is far from regular. She returned in 2008 for 200 more residency shows in Las Vegas. This was the perfect place for the “REAL” Cher since the Las Vegas strip has had 100’s of Cher impersonators and Drag Queens performing as her for decades. Cher is now 75 years “young”, and she says she is returning to Vegas this year…We shall see!

In 1999 Cher recorded a live show at the MGM in Vegas. THIS IS A MUST HAVE FOR ALL CHER FANS….Pick it up on DVD here.

It is hard to choose a favorite album by Nine Inch Nails. Each album is an experience. Trent Reznor is a ‘musical genius.” I suggest using that discount offer coupon on DeepDiscount.com and grabbing ANY & ALL titles by Nine Inch Nails. There are even a couple of live DVDs that you can enjoy

Use this link for a complete collection of NINE INCH NAILS titles.

And I will be there every time Jay Z rolls through my city.

I know that most hip-hop fans have all Jay Z titles in their collections, but some may not know about this gem….

If you are missing any Jay Z title in your collection you can always find them here.

AND…he is currently on tour now and performing across the country. Too $hort is 55 and still going strong. His hit song says “Life is Too $hort” but apparently not for Todd Anthony Shaw the one we call “Too $hort”

I highly recommend one of my favorite Too short albums,  “Life is Too $hort”. Available here.

“The Mack of the Century: Too Short’s Great Hits” on CD is a must for “the ride”. Available here.

Elton John retired at age 50. When his fans went to his concert at Wembley Stadium in 1997…

…they did not know he would announce that “their” show would be his last. I suppose he sold a lot of programs and t-shirts that night since they would be instant collectors’ items. And they were collectors’ items for 2 years, until he returned to performing in 1999. I have personally seen Elton perform many times since his retirement. And I will be ecstatic to see him again in November 2022 at his “Farewell Yellow Brick Road Tour”.

I first saw Elton John in 1970 and I have loved every show over these past 52 years. It will be sad to see Elton John go but I believe in my heart that at 75, Elton John deserves to retire and spend time with his family.

You can find his CD’s, LP’s, DVD’s,  Deluxe Editions, and Imports at www.deepdiscount.com

Also….Check back this month for a full feature on Elton John as I feature my favorite, ROCK LEGENDS!

Sir Paul McCartney is 79 years “young”. I will attend his concert at SoFi Stadium in Inglewood, California in May.

He has not announced that this is his last tour, but he does deserve a rest.

After all Sir Paul has given us 61 years of musical bliss since he first hit the stage with “The Beatles” in 1961. I will be there to see McCartney just in case he decides to make this his last tour.

You can find an impressive selection of Sir Paul’s music with “The Beatles,” his band “Wings” and his solo albums on CD, LP’s, and DVD’s here.

We never want our favorite artists to retire and go away but sometimes we “REALLY’ must let go and say….FAREWELL

Although it is sad, all artists and bands will retire someday. And when I say ALL, that means that even the youngest pop stars of today. Justin Bieber, BTS, Taylor Swift, Billie Eilish, Ed Sheeran, Olivia Rodrigo and even the next batch of pop stars will age and retire someday. They also may have 1, 2 or 3 FAREWELL TOURS so get those tickets (every time). But make sure you also have all their music on LP, CD and DVD. These formats have proven to be good and who knows if the new formats that are yet to come will be as good as the next batch of influencers tell you they are.

I am so happy I collected my musical heroes throughout my life. My collection of music and films were my saviors during the pandemic.

I may not have their live shows forever, but I will always have their catalog of music. I especially treasure my collection of Live concerts on DVD’s. I own them and no one can take the magic of those shows away from me. I can see and hear my favorite artists in their prime or in their later years…I can even see some of them “alive” again!

If you have favorite artists, bands, or genres of music, start collecting everything you can find…OWN THEIR MUSIC…the LIVE CONCERTS…and all their MUSIC VIDEOS.

OWN IT ALL because who knows when it may be gone (or gone in tangible form). INVEST IN YOUR MUSIC HEROES.

YOU CAN ALWAYS FIND IT & OWN IT by visiting my favorite place for a deep selection of music and films…www.deepdiscount.com.

LAST THOUGHT….I am okay with not seeing shows because the artist decided they are just too old or tired to “rock” or “rap” just one more day…………..

So now….I will bid you a fond FAREWELL…until tomorrow when I return to talk about some of my favorite “Rock Legends” 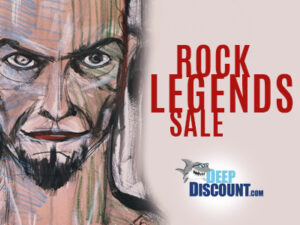